Abstract: It is an interdisciplinary research project that brings together anthropologists, historians and archaeologists. It intends to highlight how long-lasting memory is built in indigenous land and how the past is preserved in Mayan land without the need to fix events by means of a written register.

The project intends to involve the same local population of the indigenous Mayan community of San Andrés Larráinzar (Chiapas, Mexico) and transform the researcher-informant relationship into a new methodological experience, given that for some years professionals, young academics, women who have established themselves they occupy traditional positions and new actors and subjects who can collaborate in different ways in shared research registers. 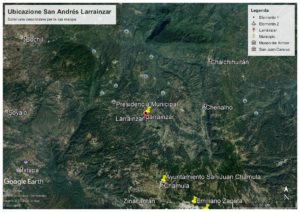 It is an interdisciplinary research project starting in 2018, that investigates the process of memory’s construction in an indigenous community, by taking in consideration that, for centuries, the mnemonics strategies of these populations were not supported by phonetic alphabet.

The matter involves the task of identifying texts and sources that can allow to keep a memory of the past, and studying which original languages convey the forms of knowledge.

It is not just about deepening mnemonics strategies but rather to reconstruct other ways to think of history and memory.

There is the need to identify which native theories are being used to read the world; which geographies allow better its description; which ontologies have represented, for ages, difference, incomprehension and misunderstanding.

Language, oral tradition, social rituals, body and clothes and, finally, territory, are the textualities that have made it possible to fight against entropy, and for this reason they surely represent objects of study.

The area of this research is the Mayan complex of mountains in Los Altos de Chiapas, Mexico, with a special focus on San Andrés Larráinzar municipality – San Andrés -Sakamch’en de Los Pobres. The research includes the collaboration of anthropologists, linguists, historians and archaeologists and the ongoing definition of shared methodologies and research techniques.

The project requires 5 years of research, two of whom were preparatory and have been accomplished. The activities already carried out are composed of 4 2-months-long stays for on-field researches focused on the following themes: a) oral tradition: shamanic songs and memory; b) sacred and archaeological landscapes; c) participation to the community rituals.

A 3-days seminar, titled “San Andrés Larráinzar: Memoria de la tierra, de los hombres y de las mujeres”, was scheduled for March 21st-23rd, 2020, in the academic venues of EGAI, in San Cristóbal de Las Casas; it will be rescheduled as soon as the universites will be reopened. More over, 6 more missions are expected for on-field researches. The partial and final results of these works will be shown at the International Congress of American Studies in Perugia, and published in a book.

Absract: the project aims to reconstruct the fundamental features of the historical memory of Puerto Ayacucho as no-oil space, considered in terms of participation and collective action in the process of national integration and strengthening of Venezuela.

Puerto Ayacucho, capital of the State of Amazonas, has been, throughout the years, an important destination of various indigenous populations, among them: Banivo, Wotjuja or Piaroan, and Kurripakos, all of them coming from the surrouding area.

In the course of the first mission, different meetings were organized with many local eminent people (researchers, journalists, indigenous representatives,non indigenous residents, city authorities) in order to define interests and needs relative to their traditional forms of knowledge, and also with the State of Amazonas’ Governor, Liborio Guarulla, who renewed the State support to the project.

In order to reach the reasearch objectives, the idea is to collect the testimonies of citizens as essential and unreplaceable sources.

The project aims to identify the social actors which have the duty to contribute to the reconstruction of collective memory directed to portray the citizens’ participation to the national integration process.

At the same time, the project will locate and systematize useful documental and material repertoires.

In the second phase, there will be an analysis, discussion and writing of results, which will be published and shared in open seminars, as the International Congress of American Studies by the main members of the research team.

More over, the mission will produce material meant for double blind peer review journals, and to further collective publications.

Title: Human and non-human primates in the Neotropics

Mission in progress: Since 2018

Abstract: The research aims at investigate the diverse relations with non-human primates in Neotropics, focusing on how these are experienced by Indigenous people and primatologists. The research will be realized using an interdisciplinary and integrate approach between anthropology and primatology.

Results will let to discuss topics such as human-animal relations, multispecies ethnography and primate conservation.

The project focuses on human-animal associations with special attention to human and non-human primates relations, studying the controversial debate between “indigenous” and “scientific” knowledge.

Empirically, it concentrates on two case study: primatologists working with Cebus spp. and the Mebengokré people of the Trincheira-Bacajá Indigenous Land.

Both these groups present specific processes of primates socialization, and particularly of capuchin monkeys.

Primatologists engaged in researches with these primates highlight social learning, the development of new skills, tools uses and abstract knowledge among these primates. In specialized literature, they present an image of these primates as merged in a social, cognitive and relational environment similar to humans’ one. Moreover these primatologists produce specific forms of practical and cognitive relations with non-human primates. These relations make of Cebus both objects and subjects of scientific research practices.

The Mebengokré are an Indigenous people of the Jé linguistic family. They produce multiple relations with Cebus spp. These are experienced in daily life, sharing domestic and forest spaces. Moreover they are present in cognitive processes, such as in mythical narratives, in ritual masks, and other knowledge practices. In both cases non-human primates, and specially the Cebus spp., occupy a preeminent position in defining pragmatic, symbolic and cognitive experiences of human-animal relations.

In this direction, the ethnographic enquiry will produce original data in order to contribute to the on-going debate about human-animal relations, both in anthropology and primatology; it will develop an effective interdisciplinary dialogue, with the involvement of researchers of both disciplines; and finally it will contribute to the development of effective conservation strategies for these non-human primates starting from the dialogue between indigenous and primatological knowledge, as well as taking into account local cultural dimensions and the recognition of the agentivity of non-human primates.

The G.R.E.C.A. (Grupo de Investigación en Etnomusicologia del Circolo Amerindiano)is a research group that, thanks to its members, carries out unprecedented research in the field of American ethnomusicology.

The main objective of GRECA is the study of music of the American continent, based on musical syncretism between the native people cultural streams, the Spanish conquerors, the African slaves and – lastly – the European immigrants, in order to spread and make known the different stages of American music.

The applied methodology is exclusively based on field work and carried out under the supervision of Dr. Maria Lina Picconi, with the specific support of Dr. Everardo Garduño and Dr. Román Robles Mendoza, and with the support of Dras. Elisangela de Jesus Santos and Maria Cristina Giorgi from Rio de Janeiro, Brazil.

Currently, it also has researchers from Mexico, Brazil, Chile, Argentina, Guatemala, Haiti, Colombia, Ecuador, Italy and Peru, whose task is to study the musical expressions of ethnic groups in their countries, distinguishing their regional peculiarities in their specific spaces.