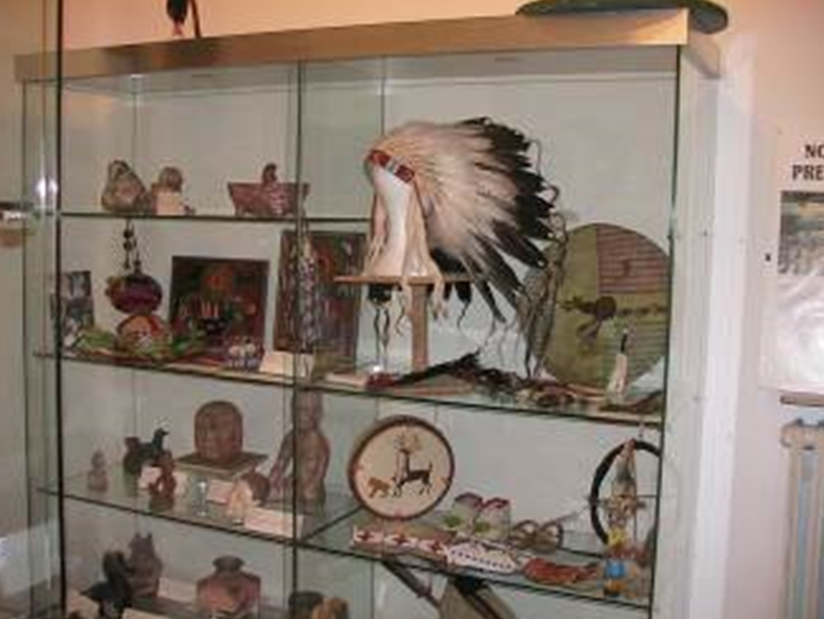 The ethnographic collection of the Centro Studi Americanistici “Circolo Amerindiano” was officially born in 1991, when, in conjunction with the exhibition Teocuicatl: the sacred song, held in Terni on the October of that same year, it was decided to collect in a single space the ethnographic objects brought together by the members of the Centro Studi during their travels to the Americas.

From the beginning the prerogative of the collection has always been the imperative not to collect non-reproducible objects, unless they are already outside the American continent and in danger of being dispersed.

That is, the collection accepts only ethnographic pieces in common use and archaeological reproductions. The original archaeological pieces present are the result of donations of materials lying outside the Americas.

Thus the first set-up was made in a small room of the old headquarters in via Fratti n. 18. The objects are set up according to a criterion of subdivision for large geographical areas, namely: Polar, North America, Mesoamerica, Circumcaribbean, Andean, Amazonian, Western Atlantic Coast and South Cone. The areas are then divided into sub-areas and regions.

This main subdivision crosses another criterion for the division of objects, for large temporal areas and for any phases, namely the pre-Columbian and the contemporary.

The initial nucleus of objects is enriched over time by a conspicuous corpus coming from the Andean, Amazonian and tropical Venezuelan areas, especially thanks to the archaeologist Mario Polia (Andean area), the ethnologists Gerardo Bamonte and Miguel Angel Menéndez (Amazonia, Chaco, Huave) and the the couple of architects, Leszek Zawisza and Chiara Cipiciani (Venezuela).

These precious contributions made it possible to collect very interesting ethnographic objects from the material culture of those places.

In 2002 this material heritage was further enriched following the acquisition of the Borruso Collection – more than 200 ethnographic objects collected in 20 years of research, carried out since the end of the Sixties by the anthropologist Nina Borruso, in the central-southern area of ​​the Mexico – and another corpus of over 60 Amazonian, Mexican and Argentine pieces by the ethnologist Bamonte, both acquisitions financed with funds from the Cassa di Risparmio di Perugia Foundation. 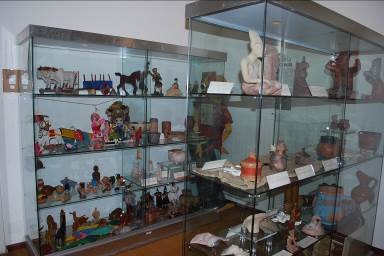 On 19th November, 2004 the new headquarters in Via Guardabassi was inaugurated and the Collection in its current form was set up here.

Since 4th May, 2009, the collection has been dedicated to the memory of the ethnologist “Gerardo Bamonte”, the great architect of the collection, who died a few months earlier.

With the acquisition of the Borruso Collection, the small room in via Fratti was becoming increasingly inadequate to worthily welcome our heritage.

But the arrival of new materials and now the imminent acquisition of the Bamonte Fund also make the premises in Via Guardabassi absolutely insufficient. The Municipality of Perugia is therefore preparing a new, larger and more suitable location. 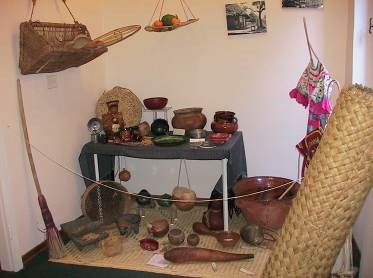 The biography of the objects acquired by Nina Borruso is very dense and deserves a brief mention: they had to constitute a part of a Museum on Comparative Peasant Traditions which, unfortunately, was never born, so the objects remained in the darkness of the boxes for almost 20 years, until our purchase.

They are organized into large thematic areas (Work tools, Plant fibers, The house, Pumpkin ceramics, Fabrics, Women’s clothing, Men’s clothing, Toys, Ceremonial-rituals) and are accompanied by a rich black and white photographic documentation made around the Seventies; it creates sequences of images that facilitate the placement of objects in the socio-cultural context of origin.

One of the fundamental architects of the Ethnographic Collection on the Americas was Gerardo Bamonte. He is responsible for the contact with the ethnologist Miguel Menéndez who procured the first Amazonian pieces for the collection, some of which are also present in the collections of great international museums.

But Bamonte then supplied the collection with pieces from Esse Ejja del Chac; materials from Alto Xingú and other areas of the Amazon; materials from the Hoti, the Huave from Mexico.

Now the final act of acquiring the entire bibliographic corpus in ongoing (about 4000 volumes, thousands of images and about 600 pieces) of the “Gerardo Bamonte” Private Fund which will help make our collection one of the most important of this genre of our country. 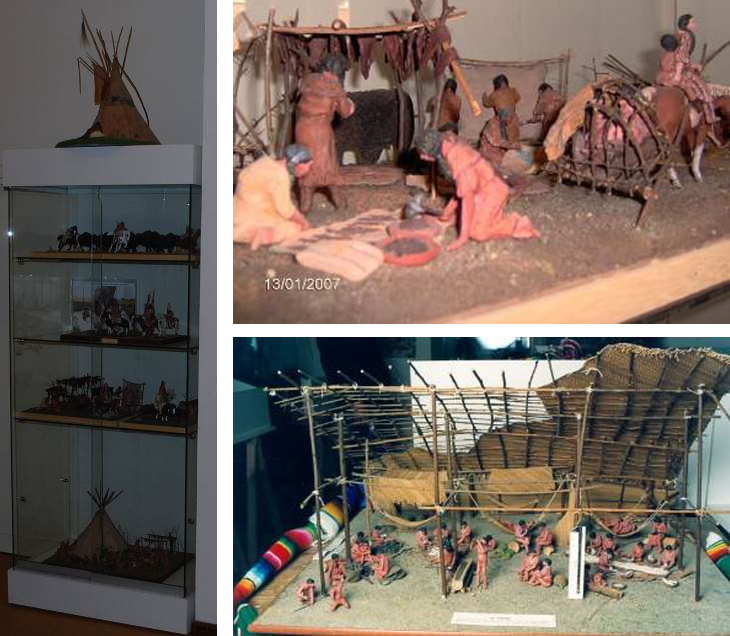 A particular note has to be made about the splendid models depicting hunting and daily life scenes of the Plains Indians and the magnificent maloca of the Amazonian Yanomami, crafted in the Seventies and Eighties by Antonio Masetti, extraordinary observer and admirable master of miniatures.

These models (7 North Americans and the yanoami maloca) were donated to the collection by the heirs of Antonio Masetti, who passed away in 1990.

In 1993 the anthropologist Mario Polia gave us several pieces from his private collection dedicated to Andean cultures. Among these, a costume complete with shamanic dancer tijeras, various fabrics of particular value, two retablos, engraved pumpkins, an Andean harp and various instruments stand out.

Note on other materials 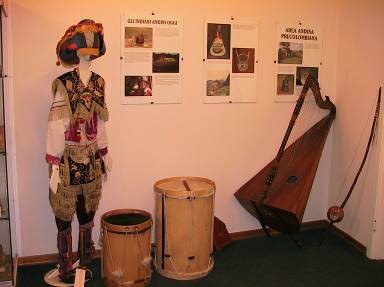 Great Hall of the Museum, Ethnomusic sector; a tijeras dancer dress, two Argentine drums, an Andean harp and a Brazilian berimabao are visible

Much of the material out of these aforementioned funds comes from missions carried out by members of the “Circolo Amerindiano” in Mexico, U.S.A., Guatemala, Colombia, Peru, Argentina, Brazil, Chile.

All this material is sometimes in common use and easily available, but as in the case of Asuriní ceramics, whose people have recently disappeared, it is often unique.

Many of the exhibits are in common use, “the despised work of hands capable of transforming mud, wood and straw, bird’s feather and sea shell and breadcrumbs into beauty” which “almost apologizing it is called craftsmanship”; they are precious ethnographic objects that testify a style of perceiving and representing articulated, complex and refined reality.

Objects “to reflect”, not to be consumed visually for pure aesthetic enjoyment of extravagant shapes and colors, which so much recall an European taste for exoticism. The ethnographic object is a fragment of culture that materializes, it is the tangible manifestation, here and now of that distant culture that produced it.

Not accepting, except in exceptional cases, the original archaeological objects, however the collection has provided itself with a considerable quantity of museal reproductions among which the following stand out: 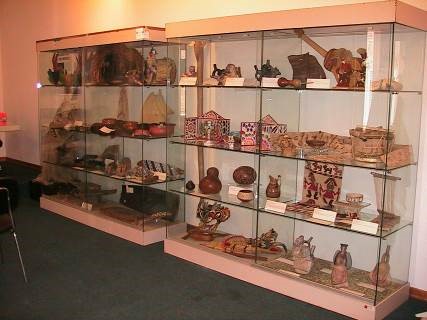 Our heritage continues to grow over time, thanks to small but constant purchases and donations.

The current form of our collection still retains the dual spatio-temporal division.

Aware that this way of “setting up cultures” is only one of the possible ways and which, among other things, has strong limits in the opportunities of representation, we have reflected on the possibilities of showing off by adopting other criteria.

One of the objectives that we have set ourselves is to succeed over time in creating a dynamic museum capable of experimenting always different representative and communicative modalities.

The current display criterion – supported by panels obtained from the exhibition in panels of 500 years of Indian resistance – nevertheless retains its didactic effectiveness by offering the immediate possibility of reconnecting the object in the context of the place of origin and the period of belonging.

We have thus created a museum itinerary divided into 4 rooms and a corridor: an imaginary journey in the Americas from North to South, between present and past, passing through the mediation of objects. 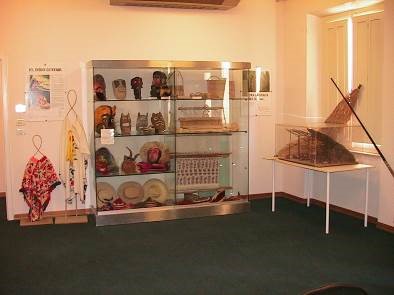 The dissemination of our heritage follows two main directions: on the one hand museum education, on the other the creation of itinerant exhibitions.

Thanks to the pieces of the ethnographic collection and the photographic material of our Audio-Video Documentation Center “Daniele Fava” it was possible to set up over 80 exhibitions throughout Italy, already mentioned above.

Another direction is the didactic activity with the schools. In this regard, we have developed a multi-sensory path project, which combines cereals, legumes, spices and various seeds with objects; a path that is to be seen but also to be smelled, to be touched, to stimulate an approach to the Americas that involves the use of all the senses to therefore favour the correspondence of images, sounds, smells in order to transmit a knowledge that approaches on a level as deep as possible.

Finally, the digitalization project should be mentioned: at the present, all the pieces of the museum have been photographed and placed in digital form. With these photos and the inventory database, a file has been created which by 2020 will be displayed on the website www.amerindiano.org, completely renewed, in order to be visible and accessible from all over the world.

The collection consists of 923 inventoried pieces, plus about 200 pieces still to be inventoried. 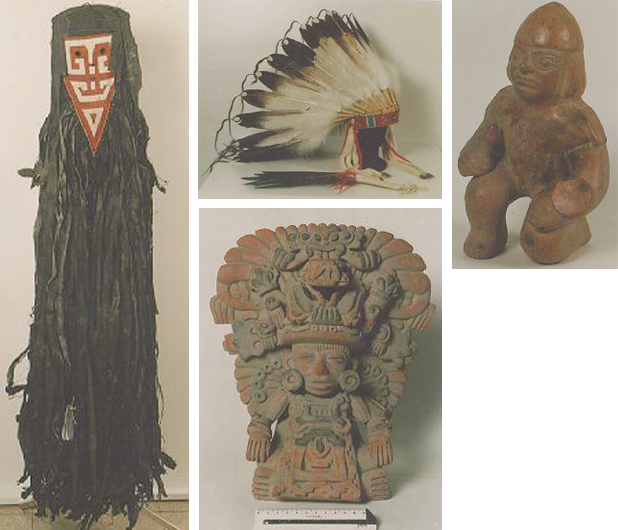