In addition to the library and newspaper library, and alongside the archive, Centro Studi Americanistici “Circolo Amerindiano” presents a Audio-Video Documentation Center dedicated to the memory of Daniele Fava, who has been for many years an official partner and photographer of “Circolo Amerindiano”.

The Audio-Video Documentation Center is also part of the Center for Documentation and Research of the Circolo Amerindiano (Ce.Do.Ri.CA) and, in some way, it has existed since the birth of the association, although its constitution was not immediately formalized. 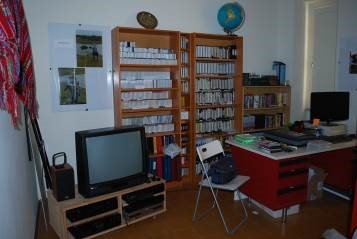 The Center preserves all the photographic and audiovisual material collected throughout the life of “Circolo Amerindiano, documenting its history and activities and collecting a large documentary and popular corpus that goes from the history of the Americas to movies, from archaeological and ethnographic documentaries to music.

Drawing up a purely numerical inventory of the material that the Center for Documentation hosts does not actually take into account the cultural value that it contains, since from a strictly “practical” point of view, large part of the supports are simple photographs, panels, audio cassettes and video cassettes (some original copies).

In the lists that complete this overview, alongside this reality, the amount of data the media library contains is evident: we talk of more than 7,500 photographs, almost 12,000 slides, 600 audio cassettes, about 900 video media – values ​​that are never fixed, but which are continuously growing over the years, both for the increase in donations and for the increasingly intense use of new recording techniques with whom the “Circolo Amerindiano” ensures the documentation of all its activities.

Beyond the strictly documentary vocation, the Center acts as an “informal archive”, a role of great value for the association itself because it accounts for its historical roots and its changes over the years. In addition to the amount, it is therefore important to highlight the variety of contents collected in order to analyze its cultural value as a whole.

The International Congress for American Studies, one of the activities for which “Circolo Amerindiano” is known in international academic circles, is fully documented from its creation until today.

Through the renewal of available technology, every moment of this very important event has been captured, which to date has involved not only the city of Perugia, but also cities as Rome, Salerno, Padua and in some cases even the South American continent (City of Mexico, Mérida, Xalapa, San Paolo). As for audio recordings, the conference was recorded on audio cassettes until 2005: the 4 audio cassettes of the first conference held in Perugia in 1979 are still available and in total they are in the order of 203 pieces. The acquisition of the images took place both through the photographs (2,940 on paper and 2,537 digital), and through the camera: we started with the first 2 beta max tapes of the conference, then moved on to the VHS (97 pieces), to the MINI-DV (393 pieces). Finally, since 2009, the immediate digital acquisition of interventions is being made on the hard disk.

The collection of images and words of our Congress testifies the growth both in the hours dedicated to it every year, and the importance of the same. In addition, the material is a potential complement in the event of a reproduction for dissemination.

In fact, since 2016, the publications of Centro Studi Americanistici “Circolo Amerindiano” have been published in plaintext on the website www.amerindiano.org and made freely accessible to the public.

In addition to the conference, all the administrative activity of the Study Center is also fully recorded.

In fact, every Congress of Members since 1985 are available in audio and/or video, containing the budget, the elections of the Governing Council and the guidelines of the projects that involve the association; or the meetings held to discuss research projects such as that of the “Ruta de la Obsidiana”, the multidisciplinary project in the archaeological area of ​​Paso del Bote, Mexico, which “Circolo Amerindiano” has been carrying out since the Nineties.

All this material completes the reports and archives of our Centro Studi.

The cultural activity of “Circolo Amerindiano” is not limited to the International Congress: periodically, other events of popular nature are proposed, where topics addressed in the research of the Centro Studi are discussed: also in this case, everything that takes place is completely recorded and preserved through the Center for Documentation.

Two significant examples that demonstrate the importance that “Circolo Amerindiano” has always given to the dissemination of knowledge are the audio recordings of the “Lessons of History”, carried out by Gruppo di Ricerca Amerindiano, a seminar in 30 audio cassettes in which the story of Latin America is told, and divided into thematic areas; or still the audio cassettes of the radio programs that “Circolo Amerindiano” held in the early Eighties. There are also many media that testify the participation in events of this type not directly organized by the Centro Studi.

Next to that of the Congress, this type of material is the most numerically consistent: 2,700 of photographs and slides, 600 photographic enlargements and a photographic exhibition consisting of 232 pieces mounted on wooden panels that portray panoramas, scenes of everyday life and faces from many areas of the Americas, with a great ethnographic and archaeological interest.

Among the audio cassettes we can mention those donated by Professor Gerardo Bamonte containing the research meetings of Gruppo di Ricerca Amerindiano on the Amazon area. As for the video category, in addition to the filmings of the missions carried out in Mexico for the “Ruta de la Obsidiana” project, the Center has many documentaries on VHS and DVD supports, both original and recorded for internal use.

Among the VHS, the collection of 40 documentaries used for the field research laboratory by the Department of Religious Historical Studies of the Universit “La Sapienza”, donated by Professor Bamonte, should be noted.

A part of this material is unique in the world, because it was recorded during research carried out by members of the same Centro Studi in different parts of the American continent. The topics covered are many: archaeological, ethnographic, historical, medical, artistic, and so on, thus allowing to perform researches on different aspects of the civilizations that have followed on that continent.

Among the pieces donated by the scholar and documentarist, there are also 10 original 16mm films of the documentaries shot in the Americas for RAI, whose market value is unknown but which certainly represent the most precious pieces currently owned by our Center for Documentation.

The Center for Documentation also houses a section dedicated to the music and cinematographic production of the Americas.

The films, in VHS and DVD supports, both original and not, were chosen both for the historical theme and for their particular cultural interest. In the music field, there is a recorded collection of music from different geographical areas of America, which document the different forms that this artistic expression assumes on in the different regions of the continent.

Currently in the Center for Documentation the digitalization of the entire audiovisual and photographic heritage is proceeding, albeit slowly, due to the lack of staff and economic resources.
It is partly carried out as part of the “Le Americhe in digitale”, digital” project, for which Circolo Amerindiano has purchased the necessary equipment thanks to the funding received from Cesvol own by virtue of the importance of the material that the Center for Documentation houses and will host.

The acquisition began in 2008 and to date 2 conferences, 3346 photographs, 2302 slides and 9 documentaries have been transferred in high quality digital format.

The objectives for the near future are both to better preserve the documents present in the Center and to allow in the future a broader diffusion of the material on which “Circolo Amerindiano” holds intellectual rights, through the digitalization of the whole material and its making available to the public in digital terms, which will be accompanied by ads on social media and in other various forms, aimed at schools, academic circles and enthusiasts.

The Audio-Video Documentation Center “Daniele Fava” carries out a series of projects aimed at developing the same archive with new acquisitions, but also at making the material and its use more organic. As an example we can mention the ongoing project – with numerous highly valuable and rare videos already available – to create a large archive containing videos dedicated to the native populations of the Amazon area, started by Gerardo Bamonte and Paride Bollettin.
Another project of considerable interest is the recent acquisition of a considerable number of specialized videos on North American populations, made possible thanks to the collaboration of Flavia and Sandra Busatta. The purpose of these collections, in the near future, is to create an archive of international importance dedicated to everything that has been produced, through images, videos and audio media, to the native peoples of the Americas.

All the materials within the Center for Documentation is the result of a collection made possible both thanks to the material and human investment of the “Circolo Amerindiano” to preserve the memory of its activities, and thanks to the free donations of those who during these 30 years have trusted the capabilities of this association.

The material, which as mentioned is constantly increasing, has only been inventoried for now, this being a premise for a more systematic cataloguing that makes the loan possible, which momentarily takes place informally among the members.

With the digitalization project, the start of which was funded with a specific call by Cesvol, a new phase has opened for this sector of Centro Studi Americanistici, which will lead to a wider diffusion of the audiovisual heritage on which the “Circolo Amerindiano” holds the rights and therefore the enhancement of the audiovisual documentary complex owned by the Center for Documentation.